What happened: Rush betrayed Caristico, costing him the main event. Both Caristico and Cibernetico want matches with Rush. Rush doesn’t want a match with any of them.

Thunder used brass knuckles to knock out Ultimo Guerrero, then fouled Euforia for the win. Euforia demanded a singles match with Thunder.

What was good: Eh, nothing. I said the Maximo match was the best, but there’s nothing you really need to spend time on. The post main event promos were fun.

Where can I watch it: It’ll be on my YouTube channel on Tuesday.

END_OF_DOCUMENT_TOKEN_TO_BE_REPLACED 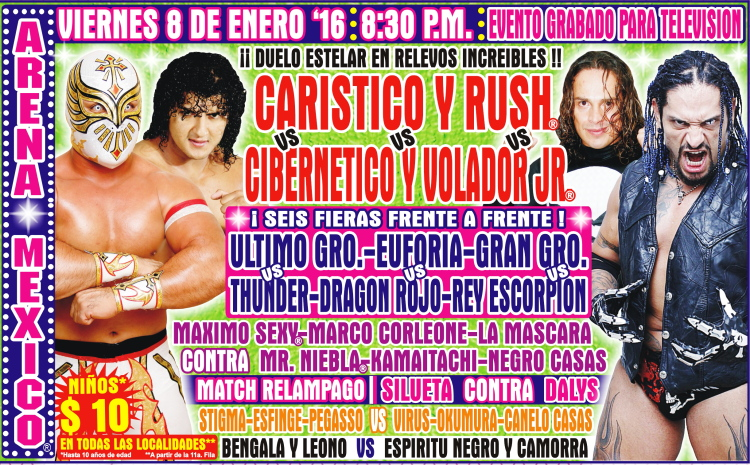 CMLL’s Friday night show builds off the semifinal from last week. Cibernetico & Volador beat Caristico & Rush when a blind Caristico fouled Rush by mistake. They sort of set up this tag match in the post match, only Rush does not like Caristico and did not want to team with him. This main event should go well.

Semimain has Thunder/Ultimo Guerrero yet again in trios. Edit: nope, the CMLL preview now lists Polvora in Escorpion’s spot. CMLL Informa seemed to say a date had been set but not yet revealed for the Thunder/Ultimo Guerrero match, and perhaps they’ll get it out after this match. This is the last Friday show for Ultimo Guerrero – and everyone else going to FantasticaMania – until the 29th, so maybe it’ll go the other way and they’ll hold off making an announcement until they can follow up on it.

Kamaitachi is still in Mexico, facing Maximo in the usual trios rematch of the previous week’s match. Mascara & Marco have been harassing Maximo in trios matches lately.

There’s no strong match on the card, with the main event having the best chance of being interesting.

The show is back on ClaroSports this week, and back at the normal time of 8:30pm. It should not be a region blocked.

Arena Mexico, however, is blocked at the moment. The building was evacuated around 10:30AM today due to a bomb threat. Some roads around the arena were shut down, making traffic even worse than usual for Mexico City. It appears this is a false alarm and no bomb was found. It surprised me how many people were milling around outside the building at this time of day, but it’s said there was a private show scheduled this afternoon for about 4000 government workers.

Hugo Savinovich told PlanetaWrestling he worked on a pilot episode of AAA this week with Ray Flores. The plan is for the show to be a weekly programming, so I’d guess it’ll be be AAA’s current TV with new English commentary. A pilot episode means they probably don’t have a network deal yet and it may be quite a while (if ever) before something comes from this.

I had guess the show would be in Spanish (and just localized for the US market.) English language wrestling seems like a hard road, with a lot of others trying and struggling. GFW has (had?) been trying to get a US network to pick up their show, and either hasn’t been able to get a buyer, or hasn’t been able to get someone to pay enough to support the idea. TNA’s gets no rights fees from it’s latest TV deal, only getting whatever money is shared from ad revenue. AAA has some advantages: the production costs are minimal since they’re already filming shows for the AAA, so they don’t need to receive a big sum to make some money off of this. (AAA may even willing to take a loss on these shows if the big picture plan is to run US PPVs again in 2016 and they see the TV as a way to promote it.) There are also Latino focused stations who also broadcast in English who might be more interested in AAA than other wrestling, so the problems TNA & GFW have had might not totally apply.

Lucha Underground will start up on Canada’s TLN on January 31st (Sundays) at 10pm ET. They’ll start with season 2, airing the shows on a few day delay from the United States. The show will air in English. The lead in is fellow El Rey original From Dusk Till Dawn, so it’s possible this was a deal between the networks rather than just for individual shows.

If any other network is picking up Lucha Underground for season 2, they’d also probably need to be announcing a start date soon. Unimas lists it’s schedule about 11 or 12 days into the future, so we’ll probably get confirmation of Lucha Underground being on their scheduled around the 19th.

Lucha Underground is looking to cast a 8 to 14 year old spanish speaking girl. You have to sign up to the casting show to find out more details. According to my stats, the odds of an an 8 t0 14 year old girl reading this site are extremely low, so I didn’t think I needed details.

Bang Data will be playing the Lucha Underground tapings this weekend. There may be a cage match.

Artillero told +Lucha that he’d meet Super Comando someday again. For what it’s worth, the Artillero on Sunday’s IWRG show is this same CMLL’s one, which is something not normally allowed for CMLL luchadors (and Artillero is booked in CMLL going forward.)

Clip honoring Rey Mysterio Jr. as tecnico of the year.

A Mexico City show on 01/31 has a main event on Zeuxis, Lluvia, Dallys vs Keira, Lady Maravilla, Mystique, which would be CMLL vs AAA (and indie), though it’s hard to figure if Maravilla is actually part of AAA. Flamita is very much supposed to be part of AAA and working the opener. (It’s a women focused show.)

UIPW will have Mariachi Loco versus Volador on 01/30. That sounds like Volador is possibly taking the week off and hanging out in California after FantasticaMania. Teddy Hart and Steve Pain are wrestling as part of the semimain.

Fenix, Drago and Pentagon Jr. are headed to Atlanta on March 13th. Angelico and Chuck Taylor will be holding a wrestling seminar in Spain on March 20th and 21st. That seems to cross off both weekends for Rey de Reyes; maybe pencil it in the 27th.

Chris Masters is unhappy AAA hasn’t helped him with his medical bills.