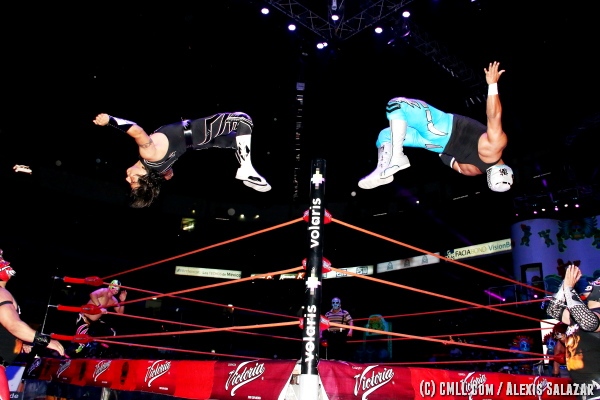 The Dia de Muertos costuming looked nice here as well, though it seemed to be less of a draw the second night out. They had the lights on by the middle of the card on Friday at the crowd looked to be at least as much as the Caristico/Elite Lucha Libre show, maybe a bit more. The lights are down on all the photos of Sunday’s show.

Negro Casas was booked here and in Arena Mexico, which seems like a pretty large oversight. Attendance here also looks better than normal but not a sellout by any means. The people who were there seem very excited but there’s not another one of them.

The Monterrey KDNA promotion announced on Saturday that today’s AAA show was suspended. They’ve begin offering refunds today. There’s no reason given for the show not happening, but it’s clearly because Alberto is off the show. The promotion of the show for the last week had entirely been around it being the last chance to see Alberto in Monterrey with AAA. (In retrospect, that looks crazy. No matter was was said, there was always a chance this could be the outcome once Alberto went to WWE.) They could’ve run the show without him, but maybe the commission put their foot down.

Meanwhile, the promoters of tomorrow’s TV tapings insist they haven’t heard anything from AAA about Alberto and are still expecting him. WWE people have told Wrestling Observer that Alberto will be at RAW, and not in Mexico. Konnan, on MLW Radio, said Alberto would not there. AAA is sometimes so disorganized that it’s conceivable that no one’s still told the local promoter, but it’s a stretch.

AAA has made no official statement on the situation outside of Dorian’s single message a week ago that more news would be coming. I guess it’s still coming! On that podcast, Konnan says Alberto’s told him that Alberto has said he’s willing to come back to lose – and still hopes to get him for 1 to 2 tapings – but WWE has said he can’t lose. (This may be true, it also may be really convenient.) It’s not clear what Alberto will do on those shows if he can’t lose the title – it’s not even clear what tapings that’d be, since he’s already off the Juarez taping and there’s no other taping he’s listed on right now.

The big news from the MLW Radio podcast is mentioned in passing – WWE told Alberto who told Konnan that they sent 10 people to Mexico to look for possible people to sign, and the only person they found was La Sombra. (Unsure how they missed Rush.) Konnan says he’s not sure if Sombra is going to WWE. They spent about 3 seconds on this conversation, so it’s tough to get more out of that. Definitely Sombra deciding he’s out of CMLL would explain both losing his mask and teasing an Ingobernables split and we know Sombra’s tried out for WWE before. Still, Konnan said he didn’t know if Sombra was going and there’s nothing else indicating he might.

There’s also some talk about Myzteziz. Rey seemed not to think it was the time to do Rey/Myzteziz – fans had been asking about it since he got back, but Myzteziz had just started to turn heel and Rey knew the quality demands on the match would be huge. Rey thinks Mytzeziz was hurt by himself and Alberto coming in and pushed him down the totem pole. Rey wanted the rematch to be both mask/mask and career/career (which obviously says he was planning on losing.) Rey talks highly about Fenix, Pentagon Jr. and picks Cibernetico as a surprising guy he’s like to work with. Rey is high on Flamita – then is told the guy he saw was actually Aerostar. He like Rey Horuz and seems sure he’s going to Lucha Underground, and he’s looking forward to working with LoKi on upcoming shows.

The updated MDA/FULL show in Monterrey’s Arena Jose Suliman has Super Porky and Rey Bucanero in Caristico and Averno’s spot. Still a couple weeks left for more changes. The Elite Lucha Libre still has a show on 11/15 in Arena Mexico with Caristico – if the Ingobernables are in Monterrey, it doesn’t leave many people to be the main event rudos. Ultimo Guerrero has to actually be healthy by then, I think.

Vampiro says he’s headed to Los Angeles to start work on Lucha Underground tomorrow.  Not sure if that means LU work starts tomorrow or if he’s just headed to LA early. That Twitter post lists Vampiro as in Duluth, Minnesota. I can not imagine Vampiro in Duluth, Minnesota. There’s been no hint or suggestion of a new announcer, so I’m thinking it’s most likely Vampiro’s still one. We’ll know in a couple weeks.

Mistico (II) was a special guest at the F1 race in Mexico and was mentioned on the broadcast, as follow up the bit with him and Lewis Hamilton from a couple days ago. As much as Caristico (Mistico I) is the story to lucha libre fans, Mistico was involved in this publicity stunt and is on a weekly TV Azteca show. He’s more mainstream at the moment. I don’t know if it’ll amount to much – the TV show was moved to a late night slot in the US a couple weeks ago, so it can’t be doing all the well – but he’s not disappearing.

Flamita (and Drastick Boy) finished up earlier today in Dragon Gate with another win. People in Dragon Gate expect Flamita to be coming back to Japan in 2016. Konnan again said AAA expected Flamita to sign with them full time when he returns from Japan. I dunno, but these things can’t both be true. I’m not feeling too confident about AAA saying they’re sure they have someone on their roster at the moment, but I’m sure he’ll be on the tapings he’s listed on.

Golpeador lost his mask to Golden Magic in Arena Naucalpan’s Castillo del Terror cage match – because that was the finish. It sounds like they tried to do an ending where both fell off the cage at about the same time, but Golden Magic would land first, only Golpeador landed first a bit too obviously to the crowd. He still lost his mask. Maybe this will make more sense when there are pictures tomorrow.

Cronica y Leyendas looks back at Mil Mascaras vs Gran Titan in a mask match.

Eric Mutter writes about why Aerostar should be heavyweight champion.