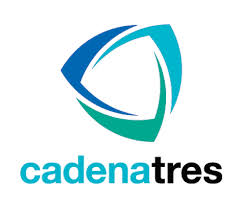 Cadena Tres, a Mexico City based network with affiliates elsewhere in Mexico, will cease operations and shut down on Friday according to a report. The channel has broadcast CMLL’s Tuesday night shows on Saturday nights since late in 2007. They’ve also aired Todo x el Todos shows in the past.

PublicMetro has the story based on a RadioFormula report earlier today. Cadenas Tres has not confirmed the story, and did not tell anything to it’s employees, but did indicate the shut down date to others. Employees are now hinting at the upcoming end and hoping it’s not the end, and there’s always at least a shot at reversal until they shut it off.

CadenaTres is currently CMLL’s only show transmitted over the air in Mexico City. CMLL’s only Mexico City television presence in their home town would be on cable networks 52MX and which are not available on all cable/satellite systems. CMLL’s reach in Mexico City is not good and this greatly reduces it.

These shows are all the ones which air on Time Warner Sportsnet Deportes in the US. That US company appears to buy bunches of episodes from C3. Those episodes will still be sitting in a vault somewhere, so maybe some one in some parent company will still be around to sell them, but it’s most likely the TWSD show will soon go into reruns before vanishing.

This news is surprising to me and seems like it must’ve surprised people involved. CMLL’s test stream for Tuesday night included the CadenaTres announcers calling the show as if normal, for a show which is not going to air unless plans change. (This story would’ve been known when CMLL Informa was on the air today but, as is usual, they did not acknowledge it.)

Cadena Tres was the only CMLL show not produced by CMLL itself. It’s possible this weekly card will no longer be transmitted on any network, though it’s likely they’ll continue recording it. They could have the Tuesday show take over the Claro Sports “Titanes en el Ring” broadcast (currently airing Sunday matches, which it’s expected to drop when Elite takes over that live event.) Alternatively, it’d probably be easier for everyone to YouTube stream the Tuesday Arena Mexico shows than the Monday Arena Puebla ones. Or they could just find another network to take the show; there’s a lot of little networks willing to take lucha libre if you can keep producing it.

Tuesday shows have been the least exciting CMLL shows for quite a while, but there’s still a few good matches which sneak thru. This is two hours less of lucha every week. 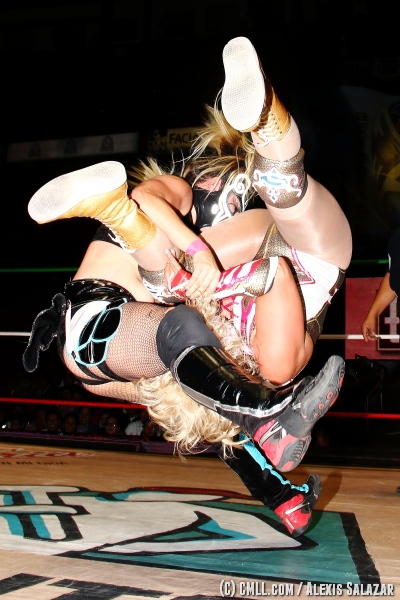 CMLL ended up airing the first two matches on cleeng. I recorded the show but did not (and still have not) watched my recording. I saw some people saying it was buffering and slowing down on them, and I saw others saying it was working fine. I did look around enough to confirm they’re not using YouTube; what they are using seems to be as secure as the AAA iPPVs.

Zeuxis used a New Move to win, as pictured above. (Maybe they realized too many people were doing the package piledriver? Though Rey Escorpion seems to be gone again.) The Yahoo! recap notes it Ricky Marvin’s Santa Maria.

CMLL knew Dragon Lee probably wasn’t going to wrestle all day – he didn’t the previous night – and they’re in Mexico City so they could literally call up any tecnico on their roster and ask them fill in. Guadalajara had a rudo/rudo match so there were plenty of not booked tecnicos around. They decided just throwing a rudo was good enough. Bleh.

Arena Coliseo Guadajara’s Twitter and Facebook posted live results, which might be the first time they’ve done that since the last management change. Kraneo versus Thunder will be Thunder’s first singles match ever in CMLL. I think it’s going to be better than the inevitable match with Ultimo Guerrero: doing Kraneo’s spots (and comedy) requires less than Ultimo Guerrero’s match, it’s likely to be a shorter match and 2015 Kraneo is just a lot more fun to watch than most of 2015 Ultimo Guerrero.

After yesterday’s iPPV trial, CMLL’s cleeng site now lists the 10/30 Dia De Muertos show as $6. (It was $5 last night. Guess you got to get in early?) $6 doesn’t include any fees cleeng adds in, but is almost exactly 100 pesos so that’s probably how they got the number. The card is supposed to be announced tonight on CMLL Informa.

It seems like CMLL’s not doing Thunder/Ultimo Guerrero for the main event. Thunder’s having the singles match with Kraneo on 10/28 and some match with him is happening on Puebla on 11/02. Three singles matches in a short time would be asking too much. It seems more likely these are all practice runs for a December (or later) mask match. That seems to leave Sombra/Volador, but we’ll find out more later today.

As Chui keeps bringing up in the comments and I keep forgetting to bring up here, AG (Alex Garcia) Studios owns a piece of the ZZInc promotion doing the Que Vida La Rey tour of shows next month, and part of Lucha Underground. Maybe there’s a connection between those events and the shows? Maybe it’s just same people sharing resources? Maybe this is another indication that Rey’s going to LU? (Maybe they’re vaguely referred to Mexican investors that needed to be convinced LU was going to ever make money?)

No Wednesday show this week. Karaoui probably the favorite to win this title because why not.

Loaded up show going against Wagner vs LA Park vs Pagano in Arena Jose Suliman the same day. UG & Caifan will have all the chops.

That main event is so close to being really good. I’m weirded out when Kamaitachi and Dragon Lee are in different matches. The CMLL recap heavily speculates about Okumura becoming a tecnico; he’s back to being a rudo.

Lightning match is the first Rey Cometa/Puma match in about three years. There’s been six of them announced and we only have results for three of them, but the only time Puma’s known to have beaten Rey Cometa in a singles match is the mask match. There’s very limited chance we’ll get to see that match.

This card is an exhibit of CMLL having a lot of not good wrestlers. People who were never good, people were really quite good who are now no longer good, people who might be good if they still care, people put in positions where it’s impossible for them to be good. It’s really running the gamut of bad. There’s a lot of good wrestlers in CMLL but there’s a lot of guys who aren’t much good but also aren’t going anywhere.

The actual text lists “Maximo Sexy” as the name of the guy in the main event. Changing the name of a guy who’s been on top for 12 years and currently is heavyweight champion seems like an insane thing to do, but we just got Boby Z so who knows.

Bringing in Laredo Kid to put him against Shocker seems odd but whatever. The poster, commissioned and paid for by the promotion that is centered around Mistic 2.0, spells his name “Mistik 2.0” and everyone thought this was a good idea to send out. I give them six months.