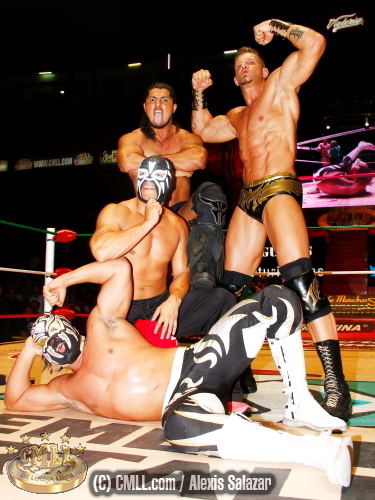 
6) Volador Jr. b La Sombra
Volador took the win, taking 2/3. Volador had the last fall won, Ingobernables intefered, Sombra went for a cocky pin and got rolled up for the loss.

Main event looks good. Would expect the title match to air instead of the fourth match.

CMLL posted The Panther vs Virus on their channel. There’s also the stellar moments from last week.

Copetes Salazar posted on Facebook that Verano Escandalo will be June 14th in Arena Monterrey, with Rey Misterio Jr. appearing. That comment can’t be found now and is probably deleted. AAA probably wasn’t planning to announce that date for a few weeks more. I’d assume that if Rey Misterio is appearing, it’ll probably end up on iPPV again.

Lucha Underground resumes taping today and tomorrow in Los Angeles. This weekend’s shows will cover June 25th to July 15th, episodes 33 to 36. No word of anyone new showing up, but it’s about the last weekend to add on; the next set of shows will close out the season. If you’re going to the shows, I’d love to get results or any notes from the tapings.

AAA TV moves onto San Luis Potosi today, so you’re not going to see the rest of Rey de Reyes unless you ordered the iPPV. Today’s matches include Brian Cage vs Alberto el Patron and the show is actually already up on the YouTube channel. The show begins with the Perro Aguayo Jr. tribute from the show.

This week’s +LuchaTV is already up too.

CaraLucha has added Cavernario vs Toscano vs Herodes Jr. to it’s 05/02 show.

ClaroLuchas has a video interview with Okumura about his career.

SuperLuchas has a good first person story about what it’s like to train lucha libre. Also, Teddy looks back to past April 10th.

Estado de Mexico’s lucha libre commission will be renewing licenses and handing out new ones on Wednesday. That they’ve only allowed for two hours to do this suggests these are not going to be time consuming processes.

+LuchaTV has video of Iron Kid talking about his ChilangaMask show and Hijo de Dos Caras on his match with Negro Navarro.

DJ Spectro looks at Cibernetico’s debut as Espiritu Negro and as Cibernetico.

Konnan Big: “I did not kill lucha libre.”

Mr. Niebla handles the video preview and the main event. That’s almost champion trio versus champion trio, only Cavernario in for Felino.

Thunder returns from whatever he disappeared to, but is not facing Rush now.

Naumiya won Amapola’s CMLL-REINA championship in Japan, probably will be losing it to someone soon enough.